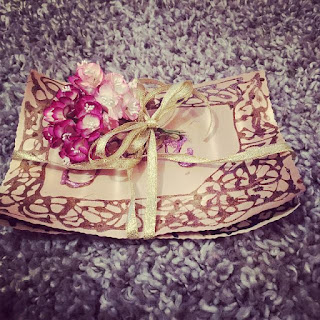 So after she lost her third tooth, she wrote a lovely letter to the tooth fairy then tucked both the letter and the tooth under her pillow before going to bed. I went to bed soon after leaving the official tooth fairy business up to her dad who dutifully swapped the letter and the tooth for 50p before discarding both items in his bedside drawer.
Things sort of went pear-shaped from there.
Around 4am the next morning, a very disgruntled Grace shook me awake to complain that the tooth fairy had forgotten her. I feigned horror then accompanied her to her bedroom to strike up the hunt for the money, only to find it under the pillow as expected. All was well with the world and a very relieved Grace settled back down fairly quickly.


Fast forward a few days and then all hell broke loose. Grace was sobbing her little heart out and it took me a good ten minutes to calm her down enough to find out why she was so upset.
‘Didn’t she like my letter? I drew her pictures and everything? Why would she put it in Daddy’s draw? Why would she put my tooth in Daddy’s draw? Didn’t she think it was a special tooth?’…
The initial shock soon turned to anger with a very upset Grace then pointing the finger at me.
‘You know, I thought something was wrong when I didn’t find any flowers or glitter…. There always needs to be glitter because its pixie dust that falls off their wings when they fly…. Okay Mum, I need to tell you something… I know you’re telling me the fairy is real and that maybe she was so busy that she just forget to leave the flowers but I remember the first letter. It was written with glitter, just like the glitter from my glitter pens. I think that maybe the tooth fairy isn’t real and that you were just pretending… just tell me the truth!
The tears were very real and no explanation that I offered would suffice so I took the low road out and handed her my phone so she could hash it out with her dad. Who magically made everything better by telling her the exact same thing as I did! Within just a few seconds Grace was giggling and skipping about like nothing had every happened.
*note to self: stock up on glitter, flowers and other fairy paraphernalia to avoid similar events in the near future*
Posted by Unknown at 12:37

Email ThisBlogThis!Share to TwitterShare to FacebookShare to Pinterest
Labels: What Grace Said Next