I may have mentioned in my last post that Owen was a little transport obsessed? Well his poison just so happens to be steam trains. Particularly the engines from the Thomas & Friends series.
This couldn’t have been clearer, when the other day, he and Grace’s had a very heated discussion in the car. Grace, who is growing up at terrifying speed stated that that when she grows up she’ll be able to wear pink lipstick and mascara.


Owen shot back with ‘No. You’re going to have Scarloey!’ and this seemed to be the catalyst for raised voices that bordered on high pitched screeches, which were far, far too loud for me in the confined space of our little Astra.


The next few minutes were a blur of mascara’s and Scarloey’s before I almost blew a fuse and desperately resorted to quietening my children with the eye-twitching soulful sounds of the Frozen album. We’d been driving for a few minutes in silence just listening to Anna banging on doors and Elsa letting things go, when I heard Owen say ‘But I like Scarloey. So you’re going to have Scarloey’… 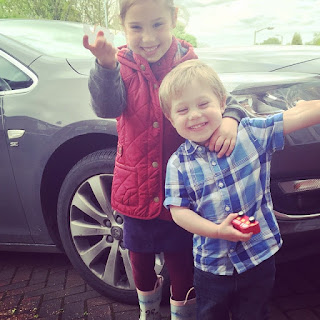 Email ThisBlogThis!Share to TwitterShare to FacebookShare to Pinterest
Labels: & Then There Was Owen