On Saturday morning Grace was performing with her preschool class at the day dare centre's Halloween themed charity fundraising/open day. All the kids were going in costume and in true me fashion, I'd been so busy that I'd forgotten to make Grace a costume. Bad Mum!
And so there we were, Friday night, racing down to Hobby Craft to get a few bits and bobs to make her a costume. On the way down to the shops, I thought I'd ask Grace what she wanted to dress up as. Clapping her hands gleefully she commanded 'I'm going to be a pretty mermaid with legs like Ariel. Make me a tail mummy!'
Unfortunately for Grace her determination to be a mermaid was no match for my determination for her to pick an easier costume to make. I’d already had a look on line at and decided that a no-sew tulle skirt would make a great addition to a witches costume. So we argued the whole journey to the shops. And as usual, my arguments with Grace are about 90% ridiculousness versus 10% sense…

'Sorry Grace but I don't think mermaids come out at Halloween. What if you be a scary witch instead?'
Shaking her head, she said ‘But I’m not really a nasty old witch. So I’m just going to have to be a mermaid instead mummy’.
Raising my eyebrows and smirking at the irony in her statement, I wasn’t ready to give in yet. ‘Well Halloween is about being tricky and causing mischief. I don’t think Ariel is naughty or sneaky. So I don’t think you should be a mermaid this time’.
Looking horrified that I would even think to suggest that a mermaid would be anything but divine, she folded her arms angrily and shouted ‘No Mummy! Mermaids are beautiful and good. And I’m a lovely little girl so that is what I want to be!’
Not quite put in my place, I battled on. ‘Well you’re already beautiful and good. But Halloween gives you a chance to pretend to be naughty. Wouldn’t you like to be a naughty witch? Besides all your friends will probably be dressed up as monsters. I don’t think a mermaid would really be happy in at a monster party. So wouldn’t you rather be a witch?’
Determined to be a mermaid she shook her head and appealed to my compassionate side. ‘No Mummy. I’m going to be a beautiful mermaid and be very nice to everybody. If was a nasty witch, I’d have to be mean and nasty. And then people would be sad and not have any fun. So I absolutely have to be a nice mermaid. Okay Mummy?’
I decided to get ridiculous and reason with her bizarre logic. ‘Yes but you don’t have to be an evil witch. You could just be a little bit cheeky and then people would still have fun. Besides, you have to sing and dance. How are you going to dance with fins?’
She kept her feet together and sat in her car seat flapping her feet like a fish. ‘Like this. It’s easy. You do it too. Come on Mummy. Let’s be mermaids together’.
I tried another tactic.  ‘Well I’m driving so I can’t be a mermaid but you can pretend for now. And then when we get to the shop we can pretend that you’re Ariel after she loses her voice and that way you can have legs so can wear a pretty skirt and be a witch, just for this weekend’.
She was still sat there staring out the window and flapping her non-existent tail when I heard her say in a very faint voice ‘But I like talking’.
And then all was quiet in the back until I heard some very quiet giggling. After a bit the giggling turned into a very sarcastic sounding laugh. Peering at her through the rear-view mirror, I asked her what she was doing. ‘I’m practicing my cackle for when I’m a witch. But I don’t sound very good’.
Going with flattery, I told her she sounded like a fantastic witch and suggested that she carry on practicing her cackle. It was quiet in the back again before she announced ‘Well I’ve been trying to turn you into a frog for a long time but you’re still a mummy so I’m just not very good at being a witch. So you’re going to have to just make me a mermaid costume Mummy’.
Almost ready to give in, I tried one last time to get her to give up on being a mermaid, ‘What if I let your pick the material and you choose a pretty pink and you can even help me make the skirt…'.
Turning her head to look me square in the eye she demanded 'Tell me more about this skirt!'...WIN! 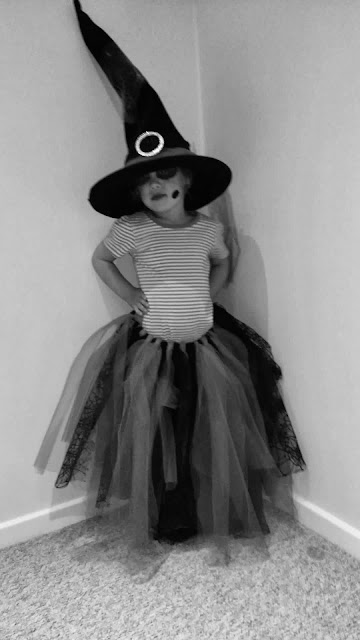 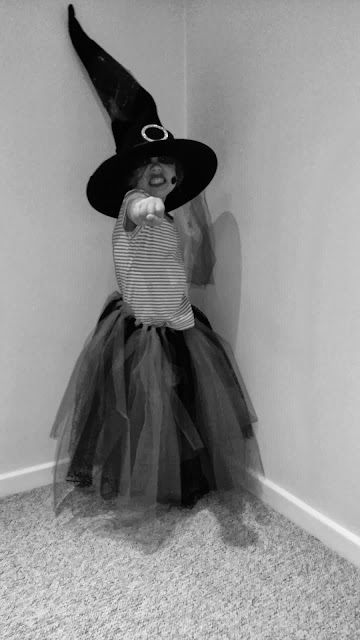 With very little encouragement, she ended up choosing a pink Tulle and a black cobweb patterned fabric. By some miracle she also managed to channel her inner witch and get lippy with the poor sales assistant in Hobby Craft. 'Mummy is my fabric ready? Tell the lady to hurry up. Why hasn't she finished cutting it yet?' Then back at home, with Neils very reluctant help, the project only took a few hours to complete. We reckon she made a fantastic witch, even if she did insist that I call her the 'Pink Princess Witch'. What do you reckon?
Inspiration for the skirt came from http://www.simplyrealmoms.com/posts/adorable-diy-no-sew-tutu/

Email ThisBlogThis!Share to TwitterShare to FacebookShare to Pinterest
Labels: What Grace Said Next